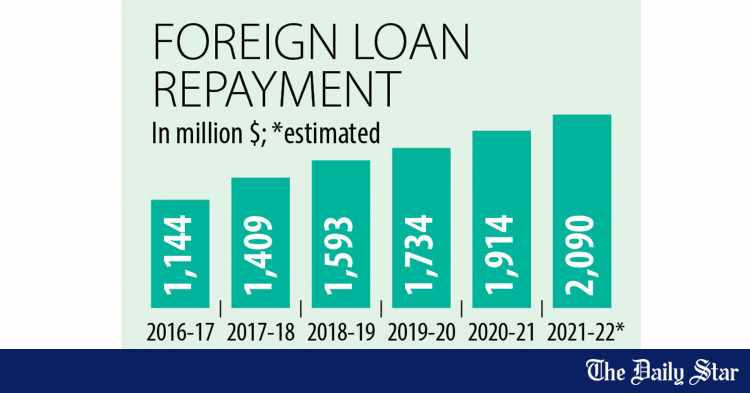 Bangladesh’s external debt repayment has increased gradually in recent times, aided by a massive influx of foreign loans from multilateral and bilateral partners in the form of project aid and budget support.

External debt service, including interest and principal, increased by about 16% in the first six months of the current fiscal year.

For all the latest news, follow the Daily Star’s Google News channel.

Bangladesh repaid $1.04 billion to external lenders between July and December, according to data from the Economic Relations Division (ERD). The amount was $900 million in the same period a year ago.

The government has earmarked $2.09 billion for external debt service for the current fiscal year of 2021-2022.

Loan repayment has accelerated in recent years thanks to a huge influx of foreign loans over the past decade.

Development partners have committed $61.99 billion over five years to 2020-21, or $12.39 billion per fiscal year on average. Disbursements totaled $31.56 billion during the period, averaging $6.31 billion per year.

Foreign aid commitment and disbursement amounts in FY21 were $9.35 billion and $7.21 billion, respectively.

For Bangladesh, most foreign loans are medium to long term, are generally concessional in nature and have a minimum repayment period of 20 years.

The loans on which principal is currently being paid were secured 20 to 30 years ago. Reimbursement of the interest rate begins immediately after a disbursement.

Of the foreign loan repaid in the first six months of FY22, the principal amount was $781.05 million and the interest amounted to $259.33 million.

A mission from the International Monetary Fund (IMF) during its recent visit to Dhaka pointed out that despite the deterioration of its debt carrying capacity and the consequent lowering of thresholds, Bangladesh remains at low risk of external debt distress.

However, the ratio of total public debt service to revenue is high and increasing. This figure is expected to exceed 100% by 2022, underscoring the need for stronger revenue mobilization to support increased social and development spending while limiting fiscal risks.

Since independence, Bangladesh has never defaulted on its loans and never sought to reschedule installments, an ERD official said.

The country’s debt-to-GDP ratio is below international standards.

Development partners have pledged $4.4 billion in grants and loans in the first six months of the current fiscal year, up 83% from the $2.4 billion pledged in the same year. FY21 period. Disbursement was $4.2 billion, compared to $3 billion a year ago.

ERD’s borrowing plan for the current fiscal year, which ends in June, is $12.89 billion. Of this amount, $10.38 billion is project aid.

Bangladesh is sitting on a huge amount of foreign loans as low spending capacity prevents it from increasing the use of cheap funds to a much higher level.